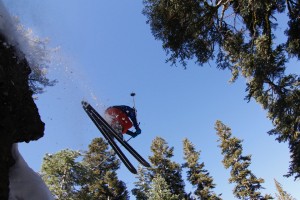 i’ve now had a chance to get the kusalas out in just about every condition except corn (apparently that’s coming), and have yet to find something they don’t excel at.
my first chances to ride them were in the midst of tahoe’s two month dry spell, and i was not super pumped to get my first ever rides on this reverse camber ski on hardpack and groomers. to say i was pleasantly surprised would be an understatement. they were a blast, and handled the ice and hardpack better than i could have imagined. they might not be first choice to slay the white ribbon of death in november, but more often than not the fields of powder are protected by shields of ice and the kusalas will have no problems there whatsoever. here is the kusala in some firmer conditions at heavenly

but let’s face it. one ski quiver or not the kusala is about the pow. and it kills it. light, nimble and stable. but what really stands out is how they stomp landings. it makes the airs look effortless. no more hip checks for me (ok, not as many hip checks for me)

the one condition where i think i would prefer the lhasa would be crusty snow. the pintailed lhasas destroy crusts. all the same, the kusala handled the soft crusty slabs in terminal cancer with aplomb. i was glad to have them then just for the shorter length, but they’re plenty nimble too.

and i have had a small chance to get them up to speed. one thing i noticed is that i still felt myself turning anyway where i would have just run it out straight with the lhasas i think. hard to say with just the one decent straightline so far (towards the end).

took them out for a day skiing corn yesterday and they blew my mind again. ever since i switched from my salomon x-screams and volkl g4’s to rossi cut 11.5 (back in 2000 or so) i have just felt that the trade off for having fatter planks was missing something when skiing corn. the playfulness was gone. after 10 years it’s back and i’m on the fattest ski i’ve ever been on. must have something to do with the reverse camber. i don’t know or care, but i love it.

is the kusala the one ski quiver for you?? it is for me. if you ski powder more than anything else then the answer is yes for you too. if you’d rather ski groomers and bumps then get the hell off my site. what were you thinking anyway? 😉

This entry was posted in gear reviews and tips. Bookmark the permalink.