it’s true! these conditions would be awesome if it were november, and not unheard of for october. unfortunately it’s the beginning of february. still, rather than look a gift horse in the mouth we took full advantage of the 16-20″ that mother nature provided. friday conditions were a little sketchy so we took it pretty easy and kept it above treeline (unusually, the advisory called for higher danger near and below treeline). saturday everything had dropped to moderate or below and the snow was still phenomenal. sunday another weak storm had pulled in and with slabby conditions and limited visibility up high we moved into the trees.

enough with the nonsense and on to the pictures. friday was jeff, myself, and nacho
jeff and nacho with elephant back in the background

meadow skipping with the emphasis on skipping

the art of being homeless

after my landlord told me in mid july that sydney (aka squiddypup) had to go, i started to hatch a plan. i was already taking the girls to yellowstone for a summer/fall vacation, so it seemed like getting a place before we got back from that would just be a waste of money.
it looked like the three of us (me, nacho, and the squiddypup) would be staying at the outback lodge, a subaru resort, for the better part of september.

while being homeless has some challenges, it definitely keeps you motivated. after all, sitting around the house just isn’t an option. what follows is a pictorial of what ended up being closer to 40 days of homelessness.
the first benefit i noticed was that i could decide where i wanted to wake up based on my plans for the next day. but i had my favorites and some requirements.
one requirement was a nice sunrise
the parking near the crystal bay boulders

waking up at the angora ridge fire lookout

the other requirement was that i could just roll over, open the door and release the hounds

cuz the puppies be cray cray

Posted in climbing, doggies, hiking, photography | Comments Off on the art of being homeless

back at it. clamping at kirkwood lake

it’s been forever since i’ve posted here. i haven’t been skiing much at all, and let’s face it, that’s what this site is about. i haven’t lost the love for skiing, but i haven’t felt like going to the same places i went to last summer and those are the places that hold the late snows. i still love photography, but lost my favorite subject, sold one of my good lenses, and then kinda sorta maybe ran over the other one a little bit (while it was on the camera). it still gathers light, but doesn’t focus, so this post should prolly be a little about photography too and how to focus with the camera rather than the lens.
so back to our sad tale. the goal was to camp at the potholes for two days, and #climbeverydamnday at old camp bluff. the girls always want to camp, and they love the potholes enough that i can bribe them into climbing each day while it gets warm enough to hit the water. so we load up, and hop in the car, which has been running rough since an incident several weeks ago where it suddenly sounded like there were bolts bouncing around inside the engine. i stop by high sierra automotive on the way out of town to see what adam thinks about the noise. his advice, the pulley on the timing belt has disintegrated, and the timing belt will go soon too. it’s an interference engine (which means timing belt failure is catastrophic), so i shouldn’t even drive the car home. we’re all loaded up for camping (and i’ve never been one to follow sound professional advice) so off we went with our fingers and toes crossed. an hour later we arrive at the eid silver lake west campground to be greeted by signage saying that camping is $25/night plus $3/night/pet. we had 2 dogs and less than $50. uggh! we could afford across the street, but the camping there is less than stellar for what we were looking for. our next stop, kirkwood lake falls into the category of ‘places i went to last summer’ but even so, we were happy to get their last available campsite.

Posted in climbing, doggies, photography | Comments Off on back at it. clamping at kirkwood lake

after our last storm in tahoe the temps shot almost immediately up into the 60’s. combined with the high sun angle of late march it didn’t take long for most spots to start transitioning to corn. the same storm was still hitting southern and central oregon, and the forecast was for continued cold. try as i may, i couldn’t come up with a reason not to head north, and had plenty reason to get the hell outta dodge. i tried to rally some friends but really it would have made a lot of the trip more difficult. sometimes it’s nice to roll solo anyway so objectives don’t get in the way of adventures. it’s fun to park at a trailhead, put on the skins, walk a while, and then decide where you’re going. the result is that, other than saturday on broken top, most of the pictures are either scenic, or pictures of nacho.

we left thursday at 3:00 with a stop at the climbing gym in incline village, and after a long delay (forgot my sleeping bag requiring detour to reno) we were on 395 heading north at about 8:00. we pulled into annie creek sno park outside of crater lake national park around 2 am, which ruled out a dawn patrol the following day. no worries though as that just meant that i didn’t have to break trail or get lost.
it was apparent from the start we weren’t in tahoe any more, as there was an 8′-12′ base at the bottom of the hill on south facing slopes. nacho is looking a little rugged in his old pack. fortunately we were on our way to bend, the home of ruffwear performance dog gear.

skiing to the lake is forbidden. and it’s kind of hard to hide your tracks, and it takes a while to get back out, which means they’re waiting for you (and the dog you’re not supposed to have). still it was mighty tempting. 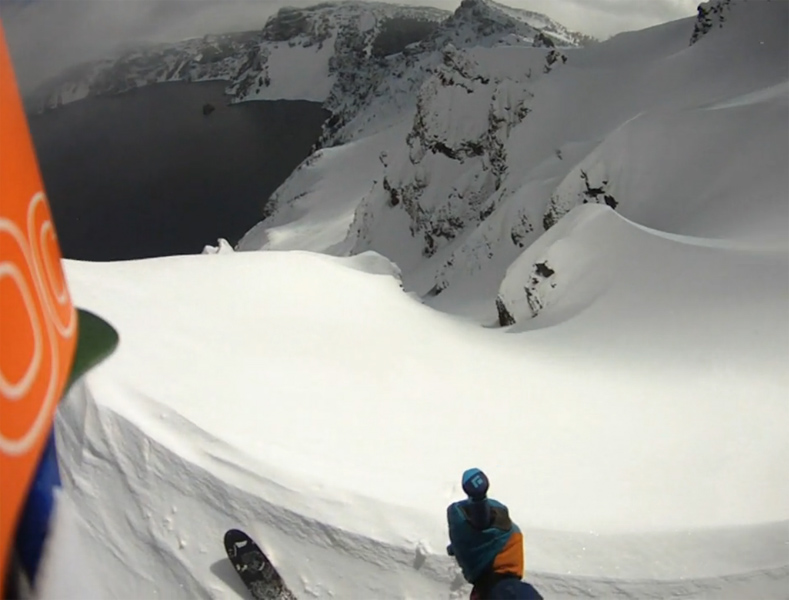 not today though. nacho stomped around cuz he wanted to go for it.

january has been a dry month and february too here in the sierra. we’ve had a few storms that have provided surprisingly good conditions pretty much throughout the mini drought.reports started coming in about an approaching storm that could drop as much as 2′ to select locations along the sierra crest. well that didn’t happen. the select locations along the crest received 4-7″ with locally higher amounts drifting into gullies
dangberg – 2/19/13 – the storm starts around 11. we’re skiing pow by 4

where the pavement ends

got a call from a buddy to head down south to poke around for some good conditions. nothing too rad and all kosher for nacho. 8 hours later at 0-dark-thirty toby and i were driving off into oblivion. two hours and two more people later we driving up a snow covered road into the sierra eastside.
i mean, what could possibly go wrong

i’ve been thinking and i just can’t figure it out. how do they know where to put that sign??

toby, seth and allison (nacho’s in there too) head back towards the goal, which is still hidden to us

a not so friendly reminder we’re still in the desert.

nacho points out our objective, a dog leg couloir no less.

Posted in backcountry, doggies, hiking, skiing | Comments Off on where the pavement ends

i hadn’t been to stevens peak yet this year, despite it holding some of my favorite lines. problem is they normally take a lot of snow to fill in. good thing is, we have a lot of snow. on wednesday, the 16th i invited ashley to gon a tour, thinking we would head back to some of mellower terrain off the north ridge. with dog in tow we (I) decided to skip that and stay on the skin track rather than have nacho post hole the long way around. the elevation gain from road to peak is about 2700′.

since that was not enough of a workout we decided to throw some climbing into the mix when we approached the summit. it started off scrambly, but as it got steeper, nacho had second thoughts

once we reached the top, we realized it wasn’t really the top. YAY!

and then there was some real climbing. it looks like i am in trouble here.

but the views made it all okay

so december started off a little slow in the snow category, things really kicked into gear on the 15th, and the conditions have been fantastic since
12/17 – kirkwood

chris hits a popular rock just above the drain

hopping off an air near waterfall

winter is here for reals now

now that our little bout with springtime is over, lets get this winter thing underway. tuesday we were skiing corn. tuesday night it started to snow. is still hasn’t really stopped. wednesday toby and i hit up kirkwood both inbounds and out. once we started, each run got deeper and better and the tracks were filled between runs. it was my first day on my new lhasas, which i had mounted on the way out the door

they seemed to work ok

toby gettin sum of the deepest turns of the day

thursday rolled around and the skies were blue for a bit. the temps stayed cold and the sun hurt nothing. nacho and i hit up the red cliffs area outside kirkwood all morning. we had it all to ourselves (sadly). here is the damage

the last day of spring was a strange one in 2012. mostly because it fell on december eleventh. the spring was filled with showers, but there were no may flowers.
there was corn though, and there was sun. and skiing is always fun

nacho and hutchski enjoying the scenery and spring like conditions

i’m the king of the mountain!

i’m the queen of the mountain!

Posted in backcountry, doggies, skiing | Comments Off on the last day of spring, 2012